Cancer is tragic but the Patients are not a tragedy!

Published by Medical Students' Association of Rwanda on February 4, 2022

Earlier in life, possibly in high school before I enrolled into this medicine program. I had heard of a few cancer cases, such as my friend’s mom who died of breast cancer, another friend’s uncle who luckily got rid of a brain tumor and so on thus making it easy for me to confuse with other diseases. My turning point of how I looked at the disease was a few months after I enrolled into the medicine program in level one when I came across a neurosurgeon late Paul Kalanithi’s memoir, When Breathe Becomes Air [1] and how he battled stage IV lung cancer after reaching at the peak of his career as a neurosurgeon. Now to make it clear, cancer is a disease in which abnormal cells divide without control and can invade nearby tissues and is the leading cause of death worldwide accounting for nearly 10 million deaths in 2020 according to the World Health Organization, WHO. Cancer is also categorized in types such as lung cancer, breast cancer, colon and so on, depending on the site of origin. But to make myself clear too, after reading Ben Carson’s Gifted Hands in high school, I was inspired and had to focus my dreams to being a neurosurgeon which is why I couldn’t wait to get my hands on Paul Kalanithi’s book. For God’s sake, this book scared the shit out of me. I drowned in my tears throughout the book because I couldn’t imagine studying and training all those years, like am doing and not be able to reap what he sowed. How unfair that is? Anyways, don’t cry too soon because the book changed my life and am going to tell you how.

About Paul Kalanithi is that he was an American neurosurgeon and writer. After graduating medical school from Yale School of Medicine, Kalanithi returned to Stanford to complete his residency training in neurosurgery and a postdoctoral fellowship in neuroscience at Stanford University School of Medicine. After 10 years of training, medical school and professorship and dealing with life and death like doctors do, he was diagnosed with stage IV metastatic lung cancer in his final year of residence in May of 2013. As a young man at the peak of profession with huge ambitions, it became a huge obstacle to turn his way round. However, at the depth of his struggle with just a few years or months left to live, it gave him a greater ability to plan and focus on the things that mattered most like writing a bestselling book which is my inspiration behind today’s writing, operating on a few cases and saving lives, and producing a baby girl with his widow Lucy Kalanithi. Paul kept his focus and died in March 2015, after two years of fighting.

Personally, as a medical student on the road to neurosurgery, I was humbled by Paul’s story. It changed my life and I learnt a few things about life as follows; death comes to all of us and it is our fate as living, breathing and metabolizing organisms and therefore we should not take time in finding our purpose to make the little time we have meaningful like Paul did. I also learnt that life isn’t about avoiding suffering and the defining characteristic of an organism is to strive. From Paul’s story and what he achieved in the two years of fighting, you can see that even if you’re dying, you are still alive until you actually die. Most importantly to me as a medical student, I also came to understand that the questions intersecting life, death, and meaning are questions that all people face at some point and usually arise in a medical context. So, Paul’s story was tragic but Paul was not a tragedy.

The story of Paul was so heartbreaking that it inspired me to become an activist and advocate besides waiting on my career as a medical doctor. I had to become part of the Rwandan medical students’ association, MEDSAR where we do activities of raising awareness and teaching the public through community outreaches on various diseases, cancer included and the major preventive measures. For cancer in particular, we always join the world in celebrating the annual World Cancer Day on February 4th where we do activities of fundraising and visiting cancer patients in various hospitals in Rwanda to show them love and to show them that we care. Recently, we paid for the medical treatment of a cancer patient, Mrs. X for the sake of her privacy, who had been diagnosed in 2019 with breast cancer, out of fundraising from the medical and non-medical students. On the day, we also invite some cancer experts or doctors to give us lecture sessions on the cancer topic. Furthermore, we also plan and do community outreaches to educate the public on cancer and some of it’s preventive measures, not forgetting about the radio and television programs.

Well much has been said about cancer and therefore my take-home message is that there is still hope as cancer can be treated but that is when it is caught early which is why through our advocacy as medical students, we encourage screening programsthat favor early diagnosis of cancer. Another thing is that we should get rid of the risk factors of chronic alcoholism, smoking cigarettes, physical inactivity, obesity and so on. Most importantly, if your unfortunately have cancer, then your perception as a cancer patient often becomes your reality. If you think ‘life is not fair’, then your life won’t be fair. But if you choose to see the bright side and think positively, your fight won’t seem to be easier, but it will also inspire many others along the way in the fight against cancer, just like Paul. 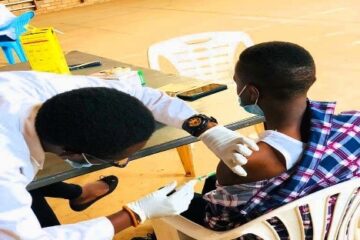 While the world is currently recovering from the COVID-19 pandemic, it would be counterintuitive for governments and health-promoting organizations to give a room for other disease-causing viruses such as Hepatitis viruses and HIV among others Read more…

THE BRAIN, FOOD AND DRUGS: (What’s Best for Productivity)

By MUGISHA Innocent Productivity may seem to be a broad term with a variety of meanings and definitions depending on one’s discipline/field [1]. While an economist might not have a similar definition of productivity to Read more…

While the world is currently battling the COVID-19 pandemic, it would be counterintuitive of governments and health-promoting organizations to give a room for other disease-causing viruses such as Hepatitis viruses and HIV among others. It Read more…