WHO states that TB is one of the top 10 causes of death Worldwide. In 2017, 10 million people fell ill with TB, and 1.6 million died from the disease (Including 0.3 million among people with HIV). In 2017 again, an estimated 1 million children became ill with TB and 230000 children died of TB (including children with HIV associated TB). Indeed, the WHO list TB on the top of the list of the leading killers of HIV-positive people. Moreover, Multidrug-resistant TB (MDR-TB) remains a public health crisis and a health security threat. In addition, WHO estimates that there were 558 000 new cases with resistance to rifampicin – the most effective first-line drug, of which – 82% had MDR-TB. (This implies an urgent need for TB education as well as education about adherence towards the treatments). WHO states that this needs to accelerate to a 4–5% annual decline to reach the 2020 milestones of the End TB Strategy. In fact, ending the TB epidemic by 2030 is among the health targets of the Sustainable Development Goals.

On World Tuberculosis Day 2019 (WTBD2019), the 24 March 2019, we had an interesting interactive session on Tuberculosis. This discussion took place online, on WhatsApp, with more than 256 participants from different parts of Africa: Rwanda, Togo, Kenya, Uganda, Cote d’Ivoire, and many other countries just to name few. The topic was “TB in Africa: the role of medical students and youth at large in the fight against TB”. Our guest of honor was Dr. Parth K. Patel and Gatoya Uwase Wendy, a medical student from University of Rwanda, moderated the discussion. 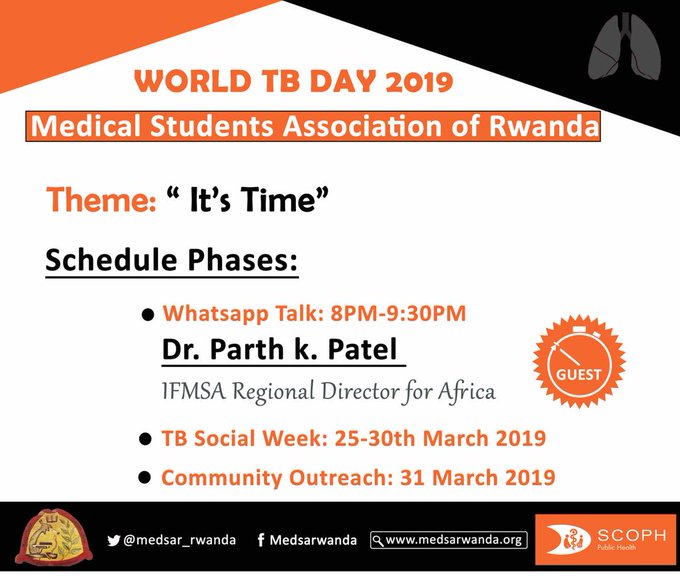 We talked about different things but in a nut shell here is what we talked about:  Tuberculosis is a multisystem disease with various presentations and manifestations. It is the most common cause of infectious disease-related mortality worldwide as it is the second biggest killer globally. It is usually caused by Mycobacterium tuberculosis (MTB) through air droplets from sneezing spitting. One can as well acquire the MTB from blood to blood, hematogenous spread.  Even though it generally affects the lungs, it can, however, affect other parts of the body; it is called “Extra pulmonary Tuberculosis.”

There are two types of TB; Latent TB where the bacteria in the body remains in an inactive state, cause no symptoms, are not contagious and there is active TB in which the bacteria do cause symptoms and can be transmitted to others. About one-third of the world’s population is believed to have latent TB, which has a much higher risk in people who are immune-compromised such as those living with HIV, malnutrition, and those who smoke.

This disease affects all age groups but affects more young adults living in developing countries. The diagnosis of TB includes a chest X-ray, Genexpert, urine lam test, skin test, blood tests and sputum tests. Regarding its treatment, it is highly dependent on the country’s TB protocol. For example in Malawi and Rwanda for active TB patients are given two months of Pyrazinamide ,isoniazid, Rifampicin and Ethambutol and then 4 month of Isoniazid and Rifampicin.

Triggered by a question From Serge Ndagijimana, a medical student from Rwanda, what he “can say about the WHO urgency the commitments made by global leaders including the scale up access to prevention and treatment; build accountability; ensure sufficient and research; promote an end to stigma and discrimination, and promote an equitable, rights-based and people-centered TB response,” Dr. Patel told us that in all honesty WHO efforts have really intensified in response to TB. But that, however, for each country based effort it is variable, but that the majority of the response is still below an acceptable level. He compared TB to Malaria and HIV, he mentioned how in many countries where these two diseases are found almost everyone knows about them, thus more still need to be done for TB to reach such level. Indeed, many question were asked and cannot all be mentioned here.

As we flew in the discussion, Dr. Patel kept inspiring the youth from different parts of the continent that was gathered on the Platform and shared us some thoughts of his. He told us that the difference between a Dr and Medical student is that “a Medical student is not allowed to get tired and he has more time as compared to a consultant who is working full time and doing multiple shifts.” Be it medical students or youths at large, we have links to people’s homes, which is much easier for us to connect with citizens.

Towards the end he once more told us that medical students and youth should go out in the communities for screening in large numbers and refer the positive screens to the hospitals thus ensuring the disease is caught as early as possible hence saving as many lives as we can. He continued that even though the diagnosis might not be positive, the youth would have at least informed the citizen about TB and he reminded us again that “the progress of a nation lies in the empowerment of its people whether medically or not.”

In conclusion Dr. Patel, thanked Medical Students Association of Rwanda (MEDSAR) to have invited him to and got him the opportunity to share his ideas with a quarter of a thousand of medical from across Africa. In addition, on our part, Medsar Rwanda, by the National Public Health Officer, thanked Dr Patel to have accepted our invitation and shared with us many insights on our role, as medical students and youth, in the fight against TB.

The reason was that we have many youth wo use social media and wo still lack some of the basic information that would be preventive to tem and so as medical students and youth at the same time we decided to think of our fellow youth wo are out there with no enough information that might help them. Therefore, we had a seven day of disseminating some basic information about TB on WhatsApp, Twitter, as well as Facebook to target those youth and the rest of social media users.

MEDSAR TB SOCIAL WEEK started from 24 March 2019 (on World TB Day) and ended on 31 March 2019. In these seven days, as said, we shared some information about Tuberculosis each day on social media to raise awareness about TB (Tuberculosis) as we want to fight against it and end it. Here are the messages we share during the whole week 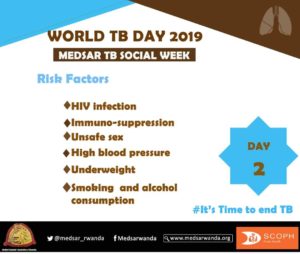 As part of the developing countries, Rwanda is also very much affected by this infectious epidemic, Tuberculosis. Thus, as the children of the country, we cannot be passive and see things happening to those we care for, our beloved countrymen and women, but rather we took the first step in going out in the community, out of our comfort zones, and went to teach about TB. We were a team of 26 medical students, from MEDSAR and on 31 March 2019, through Standing Committee On Public Health (SCOPH) we carried out a community outreach at Rango in Huye district. 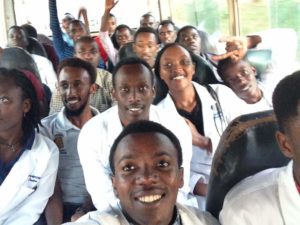 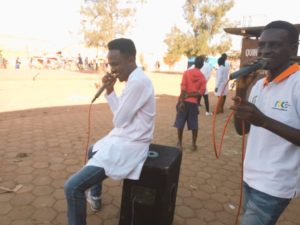 From our point of view, We chose to reach out to people individually, listening from them, asking for any information they might be having and thus knowing where to start and thus what to give as of the information regarding TB. Surely, this method was more than effective.  We had speakers, two people were giving general information about TB, but as we were as many as 26 medical students, we scattered ourselves in the community around there and talked to almost everyone.

We reached over 100 people over there in a period of 2 hours only. In the end, on the part of Medical students, we had a chance to hear from these underprivileged people and give them much of what we had as of the destructive effects of Tuberculosis. On the part of the community, they had a chance to ask the medical students different questions regarding their health issues most of them happened to have, ranging from frequent common cold to Chronic TB and many other systemic diseases. It surely was wonderful to hear from stories of that mix of young, old, men, women, children in the community at Rango Sector. 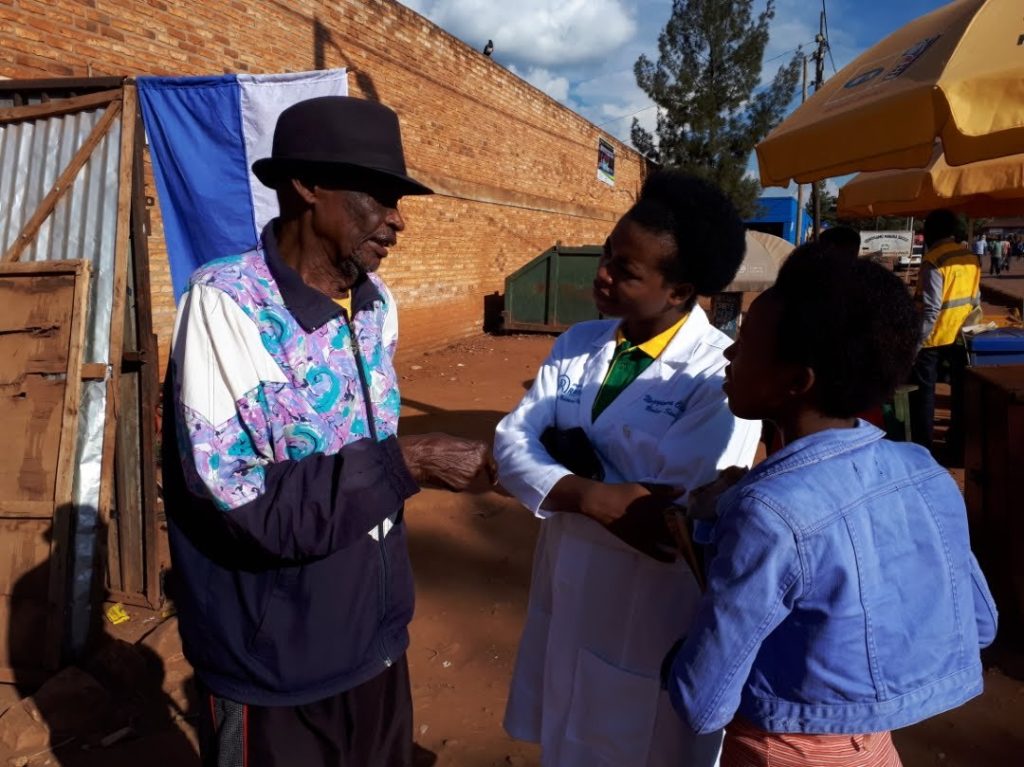 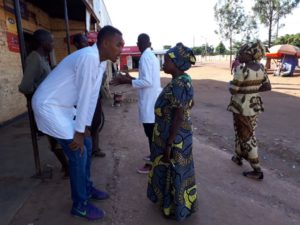 In conclusion, we believe that “prevention is better than cure”. It’s good to have hospitals and doctors able to care for our patients, but we also believe that it is better to be able protect communities, as much as we can, from having those diseases that take them to the hospitals. Nothing is sweeter than having a community that is informed about their health and the health of their loved ones. It is not an easy burden to take on one’s shoulders, but it is worthy it. We have started the journey and we are not giving up any sooner. Therefore, I want to say that it is everyone’s responsibility to fight against this preventable infectious disease that takes the lives of many, whether in our country or worldwide. We urge you to join us in the fight against any type Tuberculosis. 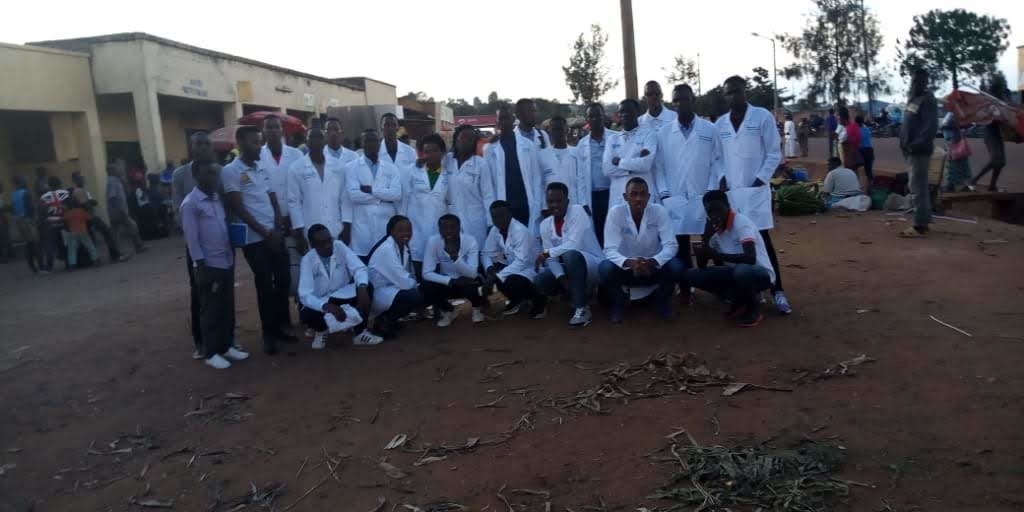